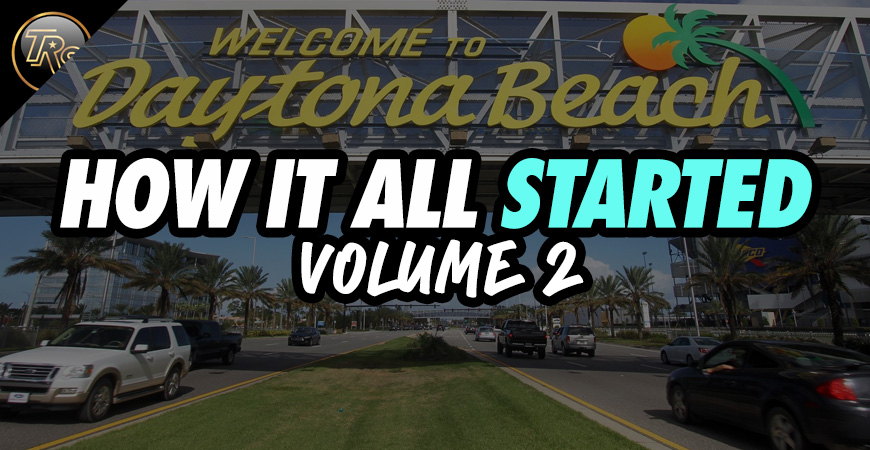 How It All Started from the Beginning Part 2

It’s now been a couple of months and I have taken my little Ruckus to motorcycle shows locally and after searching for parts I found a Ruckus Forum call Totalruckus.com. This site had lots of info on what people were doing to their Ruckus, places to meet other owners.  There were few places to get parts at this point other than PasswordJDM and Bowls. Most of the modifications were homemade and a few people sold parts here and there out of their houses or garage via Facebook or on Totalruckus.com. I found a local sub-page of Florida Riders on TR.com. A group of guys were trying to plan a trip to Bike Week. I join the group and introduce myself. There was maybe 8 of us that went and many of them were under 21.  I didn’t know anyone from the group but invited 2 guys to spend the night at my house since I heard they were going to ride from Safety Harbor, Florida to Daytona Beach, Florida over 168 miles and that’s on the Interstate. Now, remember this was before a common GY6 swap.  I was going to load my ruckus in the truck so I could take them if they could ride to my house.  Plus, I really didn’t think they knew how long it was going to take them if they took back roads to Daytona and ride back home.

I told my wife to get the guest room ready we got company coming. My wife asked, “Who are these people! ” I told her just 2 random guys I met online and I’m going to go on a scooter ride to Daytona. You should have seen the look on her face.  I loaded their Rucks in my truck the next morning and off we went to the meeting point, the Best Buy Parking Lot. It was there where I met people but only knew them as their username on Total Ruckus. Fifa, Pesky, RADhart, and so on. Only 3 guys had a GY6 swap with handmade weld-on mounts, handmade harnesses, and skinny rear tires. Their names were Nate, Tad, and Pesky. Nate is a Master Toyota Technician, so he had the skills to do these types of modifications, and 2 best friends Tad and Michael who were also into working on cars. Nowadays everything is plug and play and bolt-on, back then if you wanted to do a GY6 swap you better have some fab skills, electrical knowledge, and mechanical skills.

There were 8 or so of us all riding to the inside the speedway, fitting between an opening of a fence in the Daytona Speedway Parking  Lot to the center field. We were driving around the track and then we hear over the intercom of Daytona Speedway, “Check out the Honda Ruckus guys.” People were giving us high fives as we drove around. I think they thought we were GP moto racers or pit crew. We pulled up to the Honda Motorsport factory tent and lined up our Ruckus in front and took a pic. I remember vividly two of the corporate Honda guys coming to check out our Rucks and one guy said to the other, “Check this out they have single-sided swing arms like a Ducati.” I said to him, “You know they come like this stock, they all have single-sided swing arms.  You have them under your tent, you know?” We drove off and decided to hit Main Street Daytona Beach. Our little Scooters were so loud that all the Biker guys were taking pictures, giving guys thumbs up. Having owned a Motorcycle Dealership at this time we worked on many Harley-Davidsons and Custom Choppers. I was not expecting this reaction from the Harley crowd. When I told my group of clients and friends what I was planning on doing, taking my Honda Ruckus to Bike Week they laughed at me and asked if I was serious.  I had been going to Bike Week for years I told them, so why not try something different with a different ride. I didn’t care what people thought.

We rode through Main Street and found a parking lot for $20 a spot maybe $10 I don’t remember. I said we only need 1 and we all fit in 1 spot. I was arguing with the attendant that it’s $10-$20 per spot not per bike and another guy comes to the spot with a Camera guy. He says his name is Art Mann and he wants to know what these are and who we are. He interviews some of the guys and later that year I see has a show called Art Mann Presents on HD net on cable television.  I still have the episode on my iPhone so here’s a copy of the clip I took of our interview.

We had got so much attention on our Rucks that day. I had been to Bike Week many times before often with show bikes and never had received so much attention on a motorcycle. The next Monday I told my business partner all about the weekend and thought to myself hmmm. I already have a motorcycle dealership can I make this work if I had to?  Next time I will talk about opening THE RUCK SHOP.